THE ART OF TABLA SOLO IN THE BENARES GHARANA 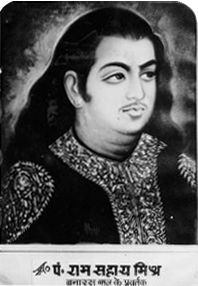 Many people think of the tabla primarily as an accompaniment instrument. While it is true that the tabla plays a vital role as taal-keeper for vocalists and instrumentalists, and is prominently featured in the accompaniment of kathak dance, it also has a rich solo tradition. Dating back to the late 18th century, the Benares gharana of tabla, founded by legendary musician Pandit Ram Sahai-ji (1780-1826), has a long history of tabla artists who excel at solo tabla performance. Pandit Ram Sahai himself is said to have performed tabla solo for seven consecutive nights, in the court of Nawab Wazir Ali Khan in Lucknow. After this magnificent solo performance, Pandit Ram Sahai-ji then returned to Varanasi (while musicians continue to use the name Benares, the city is now officially known as Varanasi), where he went into seclusion, making changes to the techniques, creating new forms, and composing new repertoire; these innovations resulted in what we now know as the Benares gharana of tabla.

Of course, performances of tabla solo are not relegated to performers of the Benares style alone; there are six distinct lineages, or gharanas, of tabla playing, each with its own variation on technique, repertoire and interpretation. The first tabla gharana to have developed is that of Delhi, followed by offshoots Ajrada and Lucknow. The Farukhabad and Benares gharanas connect back to the Lucknow gharana. The Punjab gharana is said to have developed independently, and was until relatively recently a pakhawaj gharana. 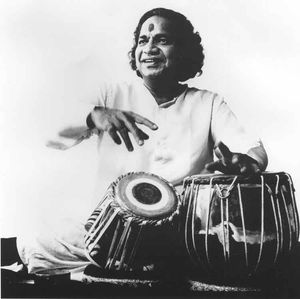 Shawn Mativetsky's Guru, Pandit Sharda Sahai-ji (1935-2011), was renowned for his solo performances. He was the torchbearer of the Benares gharana, a direct descendant of Pandit Ram Sahai. His tabla solos are still referred to as THE authoritative example of the Benares style of tabla playing, and he was highly respected by musicians both in and outside of the Indian music tradition.

The art of the tabla solo in the Benares gharana is highly developed and complex. A full-length tabla solo typically lasts upwards of one hour, and demonstrates the full breadth of the repertoire. In a solo performance, the sonic nuances of the tabla are explored, showcasing the spontaneous creativity and virtuosic technique of the artist. The solo itself is made up of numerous compositions, strung together in a specific way, according to the performance practices of the tradition. Some compositions are fixed, and are to be played as they have been passed down through the generations, while others form seeds for theme-and-variation improvisation. Some compositions are cyclical, fitting comfortably into the taal, while others are cadential, causing friction with the underlying rhythmic cycle, creating an effect of tension and release. One can view the tabla solo form like any good story, with an introduction, development, and conclusion. Whether the solo lasts five minutes or five hours, it should follow this overall structure in some way.

A tabla solo can be set to any rhythmic cycle, but the principal taal for tabla solos is most definitely Teentaal, a 16-beat cycle. This is because most repertoire for tabla has been initially composed (and taught) in Teentaal, and so a solo in this cycle will showcase the compositions in their original form. Additionally, the cycle's subdivision into four vibhags (subdivisions of the taal) of four matras (beats) each is intuitive for the listener to follow. Of course, other taals are sometimes used, such as Rupaktaal (seven beats) or Jhaptaal (ten beats), in addition to some less commonly used taals. However, these tend to require modification of the original materials in order to fit the structure of the given taal. This is why most tabla soloists tend to prefer Teentaal for their longer solo performances.

A tabla solo is typically accompanied by a repeating melody, called lehra, which serves to provide an aural outline of the underlying cycle. This melody loops throughout the entire solo, providing the performer and audience with a constant reference point. The melody will typically be the same length as the taal being performed, so for Teentaal, the melody is 16 beats long. Sarangi is the instrument of choice for the lehra, though it can of course be performed on other instruments, such as the harmonium or the violin, amongst others.

The tabla solo opens with bhumika, which literally translates as 'introduction'. This allows the listener to settle in to the taal, while also allowing the soloist to warm up. During the bhumika, which is fully improvised, the taal is not alluded to in any obvious fashion, with phrases floating over the barline, so to speak. One will hear resonant sounds of the dahina, but no resonant sounds of the baya. Once we do hear the bass tones of the baya, this signifies the transition to the uthaan, which translates as 'rising up'. The uthaan, which is also improvised, allows the tabla player to explore various subdivisions of the beat, starting slowly, and moving up through several subdivisions. The uthaan ends with a tihai, a rhythmic cadence made up of a phrase repeated three times, where the last note of the last phrase lands on sam (beat one of the cycle). Beat one is vitally important, as it is the anticipation of 'one' that allows the tabla player to play with expectations and to create tension and release through rhythmic dissonance. The repeated tihai phrase moves around within the cycle, creating tension, which eventually is resolved when it finally lands on beat one.

The next phase of the solo, the development section, features improvisation of variations on fixed themes. These themes, and the rules and strategies for improvisation, are passed down through the generations. The principal theme-and-variation form is called kaida, which literally translates as 'rule'. In kaida improvisation, the tabla player must maintain the structure of the kaida, which is akin to poetry: drum poetry! The improvised variations can use only the thematic material found within the source kaida, and the improvisations must follow in a gradual sequence. The second variation is based on the first; the third is based on the second, and so on. This highlights the spontaneous creativity of the performer. The Benares tabla solo development typically begins with a special theme-and-variation composition called Benarsi Theka, which is a three part improvisation alluding to the alaap, jor, and jhala heard at the opening of a raga performance. This will be followed by any number of other theme-and-variation forms, such as kaida, rela, bant, and angrusthana. The goal is to explore each composition to the fullest, pushing one's limits, and taking the audience on a rhythmic journey. Each theme-and-variation improvisation is concluded with a tihai. Theka is played between all items of the solo, as a return to home base, and functioning as a musical palette cleanser, so to speak.

Towards the end of the development section, fixed compositions are introduced. These must be performed as they have been passed down through the generations, with the utmost accuracy. Fixed compositions are typically played at at least two speeds. The composition is introduced slowly, at single speed, where each sound can be individually appreciated. This is followed by a performance of the exact same composition at double speed, which completely changes the perception of the musical material, as new textures and contours become apparent, and the beauty of the composition is revealed. Any number of these fixed compositions, known as gat, fard, or gat-fard, can be performed.

While the introduction and development sections typically take place at a slow tempo, known as vilambit laya, the concluding section is normally at a moderate tempo, called madhya laya. Here, fixed compositions are featured, and are often recited before being played. Any number of tukra, chakradar tukra, paran, or chakradar paran can be performed, depending on the length of the solo and the mood of the performer. One will usually play theka, then speak the composition, followed by a performance of the same, and then return to the theka, and so on. Speaking the composition allows one to hear the poetry of the bols before the composition is played on the tabla – the same composition, performed both orally and percussively!

One will often see audience members keeping taal at performances of Indian classical music, and reacting audibly to tihais and other enjoyable musical moments, either with applause or vocal exclamations such as “kya baat hai” or “Wah! Wah!” This audience interaction is important, as this positive feedback lets the performers know that the audience is understanding the musical language, and enjoying the performance. Just like at a jazz performance, if you hear something that you enjoy, you don't have to wait to the end to applaud. :)

Shawn Mativetsky presents his new solo tabla album, Rivers, a rhythmic journey to Varanasi, India! Accompanied by George Koller on dilruba, this tabla solo recording is rooted in the rich traditions of the Benares style of tabla playing, combining creativity and spontaneity, voice and percussion. Exponent of the Benares gharana, Shawn Mativetsky

Shawn Mativetsky presents his new solo tabla album, Rivers, a rhythmic journey to Varanasi, India! Accompanied by George Koller on dilruba, this tabla solo recording is rooted in the rich traditions of the Benares style of tabla playing, combining creativity and spontaneity, voice and percussion. Exponent of the Benares gharana, Shawn Mativetsky is a disciple of the legendary Pandit Sharda Sahai.

This tabla solo is set in the principal rhythmic cycle of North Indian classical music, Teentaal, a 16-beat cycle. The Vilambit Laya (slow tempo) section focuses on theme-and-variation improvisation, while the Madhya Laya (medium tempo) section features fixed compositions. All the repertoire performed is traditional, having been passed down from generation to generation, from Guru (teacher) to shishya (disciple). The tabla solo is accompanied by a repeating melody, called lehra, which serves to provide an aural outline of the underlying cycle. Typically, a single melody is played throughout the entire solo, however for Rivers, five different ragas have been carefully selected, each specifically chosen to evoke a different mood, creating a distinctive flavour for each section of the solo.