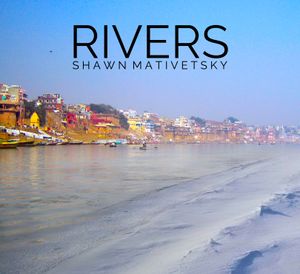 The Rivers cover photo is especially meaningful to me, as it is a composite of two photos that I took myself. This is an idea that I've had for a long time, and to see it finally come together is just an amazing feeling. On the upper left, you can see a view of Benares (Varanasi) along the banks of the Ganges, and in the lower-right, Montreal, along the banks of the Saint Lawrence River. The water in between is actually both the Ganges and the Saint Lawrence, hence the title of the album, RIVERS. This represents my home city of Montreal, and my adopted city of Benares. Benares, which is now officially known as Varanasi, is where Guru-ji (my tabla teacher) and his ancestors hail from. It is where this particular style of tabla playing was developed, and where I learned so much about this special music and the culture that surrounds it, which has entirely changed the course of my life. Amazingly, both photos were taken during wintertime. It was probably close to 20 ºC in Benares, and -20 ºC in Montreal! In Canada, winter is such a special time of the year, certainly something that makes up a large part of my cultural identity, so I really feel that this combined photo is very representative of who I am, where I'm from, and the places that have inspired me; these two very different worlds, at opposite sides of the globe, connected by water, united by these sacred rivers.